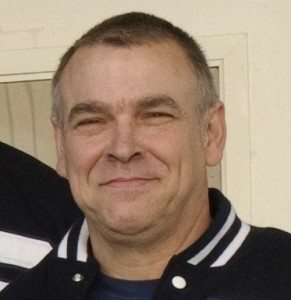 This past Friday marked 41 years of service to Peiffer Machine and its customers for Bob Boltz, the “original” Peiffer employee. Forty-one years! Who among us can imagine a career that spans that amount of time with one employer?

On February 6, 1974, “Bobby” was hired by the founder (and original owner) of Peiffer Machine, Mr. Paul Peiffer. Eighteen years old at the time, having recently graduated from high school and vo-tech, Bobby sought full-time employment from Mr. Peiffer after his cousin’s construction business (where Bobby worked as a carpenter) slowed dramatically. Mr. Peiffer, knowing Bobby from church and seeing that he was “good with his hands”, agreed to take the young apprentice under his wing.  At the time, Bobby was one of three employees in the shop. Shortly thereafter, Mr. Peiffer sold his business to Robert (“Bob”) Ressler, who ensured that all three employees continued in service for the company.

In a brief “interview” about this noteworthy anniversary, Bobby shared some of his thoughts on his work at Peiffer…. Not surprisingly, some things have changed, while others have remained the same.

When asked about the “early days” at Peiffer, Bobby noted that most jobs in those days were “in house”, meaning that machines were worked on at Peiffer (as opposed to Peiffer working at customer facilities). Bobby recalled that Mr. Peiffer purposely “bid high” on jobs requiring work “on the road”, as he desired to grow the business for “in house” work, and thus grow the business itself. Mr. Peiffer regularly scheduled his employees for ten-hour work days, with 5:30 a.m. being the regular start time.

With amazing accuracy, Bobby can recall dates for each of the company’s physical changes and building projects, the most dramatic (he felt) being the construction of the “high bay” in 1982, which greatly expanded the company’s capacity for accommodating large rebuild/repair projects in-house, including the addition of a 30-ton crane and drive-through doors for large tractor trailers ferrying machines to and from the Peiffer shop. 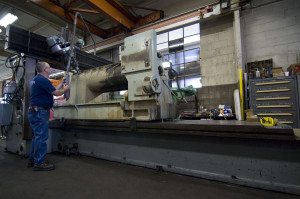 Through the 80’s, the workload grew, as “word of mouth” about the value of working with Peiffer spread among companies. Bobby credits this phenomenon with making Peiffer what it is today: well-respected in the industry for quality workmanship. Peiffer customers were still mostly local/regional, from Baltimore to Philadelphia, from York to Waynesboro, with occasional jobs in New Jersey and New York.

In the next decade, Bobby cited the expansion of customers as the most exciting part of the work for Peiffer. Along with that came more “road work” (i.e. work at customer facilties), too. Traveling beyond the mid-Atlantic region became commonplace. As Bobby said: “the word of mouth spread even further”. (Perhaps the worldwide web helped with that, too?)

About the work itself, Bobby said emphatically that “it’s still the same; we still do today what we did back then – fitting things, restoring accuracy”. Oh sure, he acknowledged, technology and types of machines have advanced – we’ve moved from strictly manually operated machines to CNC and multi-axis machines with all different kinds of controls. And now we have lasers to help with alignments!

When asked about why he has stayed at Peiffer for so many years he said: “I like what I do…. it’s challenging and rewarding at the same time.” He admitted that the work can be frustrating, as well, but when you conquer 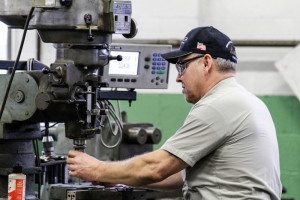 that challenge and can say to yourself, “I got that fixed!”, that is a great reward, both personally and from a corporate standpoint, too. Bobby thinks THIS is why Peiffer is so well known – i.e. that our team consistently works through challenges to achieve successful outcomes for our customers.

His advice to those starting out in this field (i.e. the “next generation of Peiffer Rebuilders”)? “Be conscientious, be observant, pay attention to detail.” He explained further that this line of work operates on extremely “close tolerances”, so it’s very critical you “pay attention to the little things, because those things can create bigger problems if you’re not careful.”

Above all, in his approach to the work (even when frustrated with something), he said “you must remain calm – you can’t get frustrated and let that affect your work”. While some folks might not consider this a compliment, Bobby does:  he related a story in which an old Supervisor was debating about who to put on a certain project, and the Supervisor appointed him (Bobby), saying: “He can do it – he’s fussy.”

Forty-one years of “fussy”…. we can all aspire to that.